That’s all I’m hearing all day long from … EVERYONE!! Good … bring it on!! Any excuse not being able to get to work, staying snug-as-a-fucking-bug holed up at home, snow shoveling multiple times throughout the day sounds like a motherfucking plan to me!!

It must be a fucking disease, I can’t help myself … I love beautiful, high-quality cookware!! I went to Williams-Sonoma to browse … only (I swear, lol), but instead ended up walking out with these two gorgeous pans from Calphalon  … treating myself in the process. The smaller one (10 inch) will be used as my new omelette pan, and the 12 inch as my everyday sauté pan. Hey, I did show some restraint … steered clear of the Le Creuset and Staub cast iron pots … steered clear of a much, much heftier bill too, lol!! 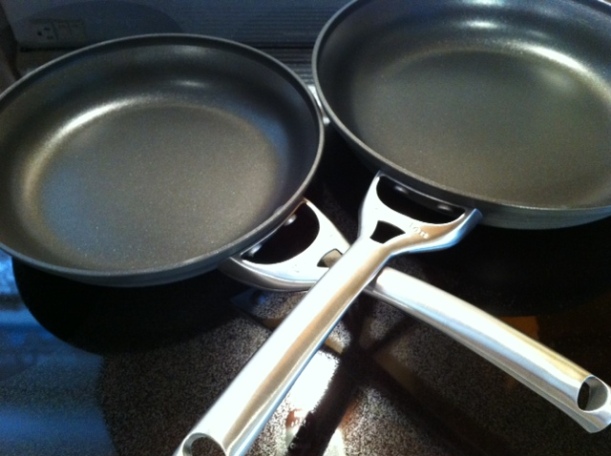 We’re all sensitive people
With so much to give

And givin’ yourself to me can never be wrong

Come on, oh come on

Don’t you know
How sweet and wonderful life can be?
Whoo-ooh
I’m askin’ you, baby
To get it on with me
Ooh, ooh, ooh

Made these bad-boys yesterday!! This is my famous, ok … Molto Mario’s recipe, lol. Famous in my house at least!! The gang motherfucking eats them up (sorry, bad pun)!! It’s not easy either, very time consuming, a lot of preparation needed, comprising many steps  … but so, so incredibly worth it!! And the sauce isn’t your typical marinara version either … spaghetti sauce for all you motherfucking Mungia Cakes out there, lol. It’s much more complex, richer, and sweeter ’cause of the abundant amount of red onions!! So delicious … yummy!! This time I combined it with stozzapreti and served it family style …  the perfect accompaniment … don’t you agree? 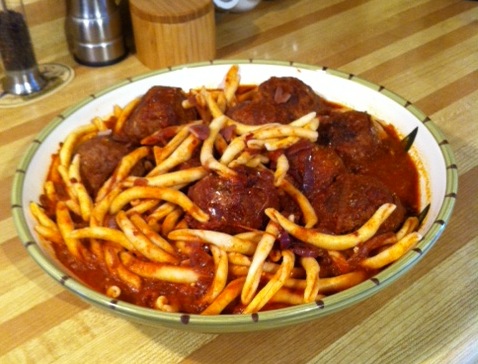 Well I’m takin’ my time, I’m just movin’ along
You’ll forget about me after I’ve been gone
And I take what I find, I don’t want no more
It’s just outside of your front door

I\’ve gotta be on my way

Well I get so lonely when I am without you
But in my mind, deep in my mind,
I can’t forget about you
Good times, and faces that remind me
I’m tryin’ to forget your name and leave it all behind me
You’re comin’ back to find me

Is it me or is Fresh Co., the store, the shoppers … ok, not so much them, I mean not all … but certainly a large portion, and the staff the fucking worst ever? Holy shit, place fucking disgusts me. Never have I encountered such an apathetic, ungrateful group of employees … the motherfucking lot of them!! I get depressed when I leave, because I see they’re all fucking depressed when I walk in. I hate going, in fact I only go 2-3 times a year. Not voluntarily either … my ass gets sent there. Realizing I’m out of my Honey Nut Cheerois, and since I’m the only Honey Nut in the house, it’s up to me to buy some, and I was told of this sale they were having. At checkout, scanning the price, I realize I bought the wrong sized box. The box I’m holding, it’s small, and not on sale? How fucking small is the sale box gonna be I’m wondering? This was the only size other that the jumbo sized ones that I saw in the cereal aisle I politely informed  the cashier. “Oh, the ones on sale are in aisle 4”, she retorts (What the fuck are they doing in aisle 4 ? And more importantly, I’m not losing my place in line ’cause you douche-bags don’t put the sale priced cereal with the regular priced cereal all together in the cereal row like a big happy family of cereal … so I make a mad dash for it). Quickly returning to my rightful place at the front of the line, my concerns are immediately validated. To say these boxes are as a big as a thimble, is an insult to the thimble. I’d say this is the very last time that I’m ever going there. Never again. But then I’d just be repeating myself!! Good news, the 2 boxes I bought will give me my Cheerios fix for a good 4, maybe 5 days, lol!!

As promised!! Wouldn’t want to disappoint any of you motherfuckers, saying I went back on my word, that I didn’t deliver … that I LIED!! I really really wanted to love the malanga, and while it didn’t detract from the taste of my already awesome stew … it just didn’t add anything either. Was kinda disappointed, just tasted very bland … honestly potatoes alone are fucking great, potatoes with turnips (in retrospect, this was the greatest motherfucking secret addition) add that extra depth of flavour and dimension that this stew cries out for. Perhaps, the malanga with its South American cultural roots really has no place in my European based dish?! Bottom line: although it wasn’t a hit it outta the ballpark game winning grand slam homerun, it wasn’t a bottom of the ninth bases loaded with two out, standing and staring, handcuffed and frozen, unable to pull the trigger, watching the ump punch you out ending the game either!! I was thrilled trying something new, and in that sense it was a success … I mean that was the point after all, right?

BTW,  the best part of crock-potting is having food for 3-4 days … you can’t beat that!!

This pic is day four … not only does it hold up well, it gets better each day (like chili), flavours marrying another more and more, everything coming together!! Incredible!!