… FINALLY!! It’s been a long haul getting here, but today I can optimistically say I’m getting better! Everything went well, and this time I capitulated and snagged a painkiller prescription before I left. But, not before Dr. Harry asked for my driver’s license. Huh? Apparently a new (new to me at least, lol) government policy. Same thing happened at the pharmacy … but, at least this time when she began her explanation, I stopped her telling none was necessary.

A couple of quickies:

Was just getting into it w/ the assistant, telling her my running stories/accomplishments before the good doc came in, ready to go to work, abruptly ending my few moments of glory. She was all interested, and impressed, asking lots of questions. Was a great, relaxing/calming way to begin the procedure. It made me happy talking about it. Other than my blog, really don’t get an opportunity to say much about it with anyone. Oh sure, Tiff gets an earful, but it’s exiting the other one just as quickly, LOL! 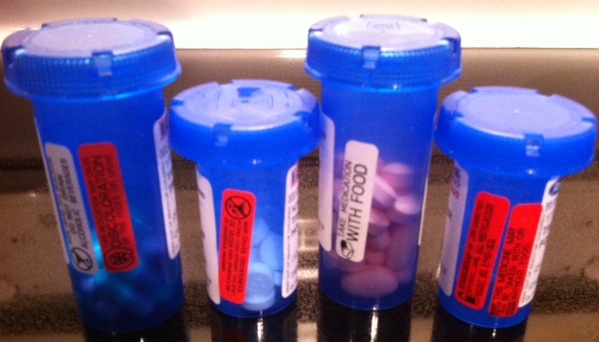 gave me the gov’t literature too, lol

… for about a week now. didn’t help i overextended myself with my stubbornness trying for a new distance record. i swear, not only did i pull my hammie (same one), i fucked up my achilles (i think it’s my achilles? it’s around the back/outside of my ankle … and with my daily running – it ain’t gettin’ any better). i really needed this today! a sub 18 minute 4k (24 seconds shy of a pr) … and quickening my pace with each successive split! 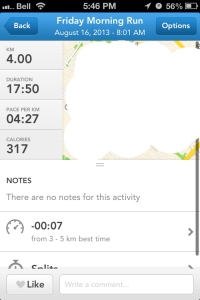 Thirty CONSECUTIVE days! Since May 14th when I began, I covered over 500 kilometers. That’s from Toronto to Ottawa (now, I have to run back, lol). This past week has been a particularly good one. I’ve felt strong, having accomplished new goals, set a 10K PR of 45:33 – my proudest achievement – but it’s my last 6K (my quickest splits) that still blows me away … 26:57. 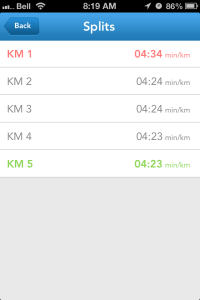